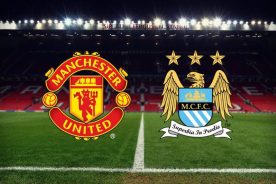 The most interesting confrontation of Football League Cup last 16 will be the match between Manchester United and Manchester City. Teams have already played this season in EPL and Guardiola`s team was the stronger, however, a lot has already changed and Red Devils will try to take revenge.

Manchester United managed to win several matches at the start of the season when they triumphed in FA Community Shield and confidently won the first three rounds of Premier League. But then they lost their game and suffered several bad games. They are still in search of their football. Jose Mourinho`s Manchester United has enormous potential but the team is not progressing. Manchester United is currently positioned seven with fourteen points.

Manchester City is a leader in EPL due to the best goal difference, but their team spirit leaves much to be desired. They were beaten 0:4 at Camp Nou and cannot win in last three games in EPL.

Both teams are not in the best condition and especially their defense line, and therefore we expect game with a plenty of goal attempts.  We believe that both teams will manage to score. William Hill both team to score odds are 1.73.