Dorado Became a Partner of the Spanish Team 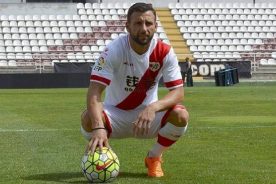 A well-known bookmaker Dorado puts best leg foremost to clear-cut ascendancy in the Spanish market. The previous day the operator announced about the long-awaited signing of a sponsorship agreement with Rayo Vallecano’s football team, which plays in the Second Division of the Spanish League.

So, it is reported that the term of the agreement runs until the end of the season. According to the terms, prescribed in the agreement, the logo of the operator will be printed on the t-shirts of the football club.

There is one more attempt of the bookie to occupy attention of its enthusiasts. In this case, the operator assures that it offers to its punters increased betting odds for the matches of Rayo.

It should be noted, that Dorado bookie began gaming activity in 1979 and has been pleasing customers up to the present moment. It is to be recalled that this sports book does not provide its services online.

As you know, Rayo Vallecano left La Liga according to the results of the last season and plays in the Segunda Division now. Currently the team occupies only the nineteenth place in the league table.