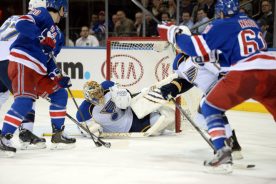 On November 1, Rangers will have a tense game against St. Louis. The both teams won the previous games against Los Angeles and Tampa Bay accordingly. Blues are currently fourth in Western Conference and Rangers are third in Eastern.

St. Louis are playing defensive-minded hockey. They won against Los Angeles 1:0 in the last game and previously lost to Detroit in extra period 1:2. Blues had a perfect start of the season. They got 3 wins in first three games against Chicago (2:5), Minnesota (3:2) and Rangers (3:2).  But after that they lost two games at a run to Vancouver (2:1 in extra period) and Edmonton (3:1).

Rangers have more attacking style. They scored six times in a last game against Tampa, but got three from Carolina and lost away match with total score 3:2. Their leaders Miller (with 9 points), Zibanejad (8), Zuccarello (7) and Nash (7) are in a good form and can cope with any defense line.

We believe that it is going to be tense game and matchup of two different styles. Rangers are going to use their attacking power and win the away game, while Blues get ready to counterattack. Marathonbet sets odds at double chance on New York at 1.50.