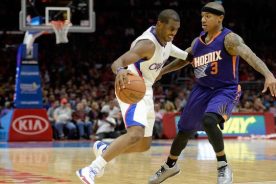 Clippers currently lead the Western Conference with 2 wins, while Phoenix lost three games in a row and are second who leads from behind.

Clippers had a great start of the season and got two wins in two matches against Portland and Utah. Game against Phoenix will be second consecutive home game, so they are not tired with long travel. Game against Utah was rather easy and no one played more than 30 minutes of the game. There was a suspicion during the match of De Andre Jordan`s injury, but he played in the last quarter, so the injury is not serious.

Suns were much inferior to their rivals in the start of the season. Moreover they recently had a tough game against Golden State, in which the leader changed several times.  The first half Suns had the lead, but then Warriors won the game showing perfect team work in the last quarter. Bledsoe and Warren played more than 36 minutes, and Brandon Knight does not yet show his previous season game level.

Phoenix suffer from poor attacking game and we believe that in away game against such an opponent they won`t be able to beat their individual total. Titanbet sets odds at 1.85 on Suns total under 97.5.