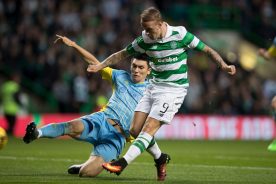 On Wednesday, 27.07.2016, the first match of 3rd Qualifying Round of the Champions League will take place. Celtic is on a visit at Astana Arena. Experts believe that teams are even and have equal chances.

Home team has less experience in the Champions League, but it is in good form. The team didn`t lose in the last 7 home matches in this competition. This year, Astana’s current home series consists of 11 matches without defeat.

Celtic was eliminated in this stage of Champions League by another Kazakhstan team in the season 2013/2014. Then the Scots were beaten by Shakhtar Karaganda. This year Brendan Rodgers`s team is primed to pass in the group stage of the tournament despite losing two defenders Erik Sviatchenko and Kolo Toure and midfielder Ajer.

Astana is considered to have more preferable chances in the first match. William Hill offers odds of 2.40 for a home team win and 3,10 for Celtic. A tough game is expected in this match and therefore, we assume that a few goals will be scored in it. We predict total match goals under 2.5. William Hill offers 1.50 odds on this outcome.