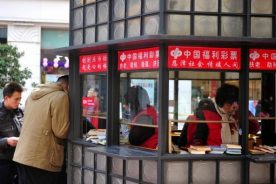 Asia belongs to the largest gambling markets in the world. The press service of the Chinese Ministry of Finance reported that the realization of the raffle tickets by the national lottery grew by 8.3%.

According to the investigations the total amount of purchased tickets in China in October 2016 was 34.000.000.000 Yuan, which comes to 4.8 billion dollars.

It is reported that the total sum of purchased charity tickets was almost 17.300.000.000 Yuan that is 6% higher than September’s sales figure.

Asians are fond of gambling, therefore the sports lottery has also shown positive results in growth. Total figure of the lottery tickets amounted 16.200.000.000 Yuan, which is 10.6% higher than the last month. It is worth noting that such a result is connected with the growth of this industry.

The highest sales figures were shown in Hunan province, where the average sum of held lotteries increased by 426 million of Yuan. Also the provinces of Hubei, Shaanxi and Henan became the leaders among the sales.