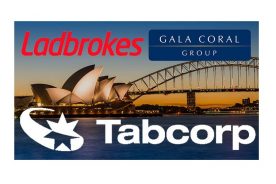 Ladbrokes Coral is a new sports book that appeared due to mergering of two largest British bookmakers. The operator considers Australia as one of the priority locations for work and wants to strengthen its positions. Media reported that the company was at the point of expanding of its global presence and interested in taking over the local giant Tabcorp Holdings.

The deal can cost 2 or even 2.5 billion pounds for Ladbrokes Coral. “The Mail on Sunday” states that the operator has already hired advisers to prepare the agreements for taking over. The leadership of Ladbrokes Coral still refuses to comment on the situation.

Negotiators must make arrangement and a short time later the world market will receive the largest gambling company with a market value of 5 billion pounds.

This is a reminder that the Tabcorp Holdings reported about its plans to take over another Australian operator Tatts Group. British experts and journalists believe that Ladbrokes Coral is going to prevent that takeover whatever it takes.