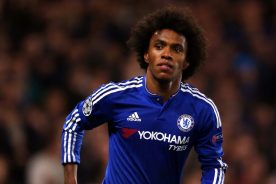 It was announced that the Chelsea`s midfielder Willian can change the club during the winter transfer window. It is stated that Manchester United is interested in this Brazilian winger.

It is known that the player has lost the place in the team`s line-up since Antonio Conte joined the club. The couch prefers Pedro instead of Willian in the first eleven. Due to the lack of appearances Willian expressed a desire to leave Chelsea.

Former couch of Manchester United Jose Mourinho can help Willian in realization of this plan. The current manager of the Red Devils wants to strengthen his team with the help of Brazilian midfielder to achieve both greater efficiency and squad variety.

In January, according to the British journalists’ rumors, Mourinho will do his best to make this transfer succeeded. We can add that the transfer fee for Willian is estimated at forty million pounds.

This is a reminder that last season Willian was given a title of the best player of the year in the EPL. There are only eight appearances in English Premier League in current season.