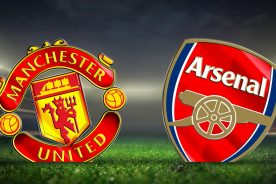 The first day after the international games break will be marked with super match Manchester United vs Arsenal. Still there are much more rumors to Jose Mourinho’s work in new club than the sense from his invitation to Manchester. Hundreds of millions for the purchase of new players were spent and serious tasks were set, but new era for Red Devils still has not started. In 11 rounds in EPL Manchester United failed to win half of the games, and has not won a single game in October. Manchester urgently needs a win over a serious opponent.

On the contrary Arsenal shows great form. Arsene Wenger`s team can finally give a serious result this year. Arsenal is unbeaten in sixteen games run in the various tournaments. It looks like that Arsenal is one of the main favorites this season on the league title.

On Saturday, Arsenal is going to beat United. We suggest placing bet on Arsenal`s victory with +1 handicap to play safe. William Hill sets odds at 1.50.