Manchester United – Feyenoord: Tips for the Match. Europa League. Round 5. 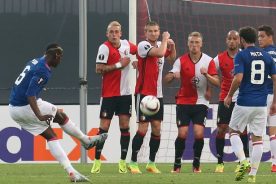 Manchester United is going to return the favor to Feyenoord on the home pitch in the fifth round of Europa League group stage. The Red Devils are favorites in the upcoming game, though they are not in a good form. The potential of Mourinho`s team is much bigger.

Pause for International Qualifiers played into the hands of Manchester United. Jose Mourinho`s team showed good football in the rival against Arsenal. Devils were stronger but drew the game in the last minutes of the game due to Giroud header. Manchester United is third in group A standings with 6 points with only two rounds remaining. This situation is unacceptable for such a high-status team, so the Devils will try to win on next Thursday.

Feyenoord is playing strong this season, but in the last games Van Bronckhorst`s team showed slump. At last five games they got only two wins. Despite this, Feye is still in the top of Eredivisie, two points ahead of Ajax.  In Europa League they have got already 7 points and remain first.

MU demonstrated quality football in last game, so we can expect increased activity and probable victory. Victoria for Red Devils is needed both to improve the tournament situation and morality level. 1xBet sets odds at 1.42 on this outcome.