Arsenal – PSG: Tips for the Match. Champions League. Round 5. 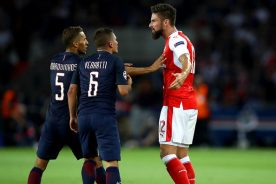 Arsenal is a powerful force in season 2016/2017. Arsene Wenger’s team is fighting in three tournaments, and does it successfully. On Wednesday, Arsenal is going to continue their unbeatable run in Champions League against French champion. Majority of bookies believe that Londoners have more preferable chances to succeed in the upcoming game.

On weekend Arsenal played a tough game in Manchester against United. The Gunners conceded the first goal, and equalized in the end of the match. Giroud headed the ball straight into the net with no chances for De Gea. In Champions League Arsenal is first in Group A with 10 points after four rounds.

PSG is showing perfect form too. They won all their last four games. Emery`s team has beaten Lille, Rennes, Nantes, and Basel in the Champions League`s away game with the score 1:2. Despite the recent results they are only third in the Ligue 1 standings, three points behind Nice. In Champions League PSG is equal with Arsenal, just behind on goal difference. PSG has strong squad and is able to fight Arsenal.

Arsenal is going to win this match and the group stage. We believe that the Gunners can win the game against PSG with handicap 0. Winline sets odds at 1/60 at this outcome.