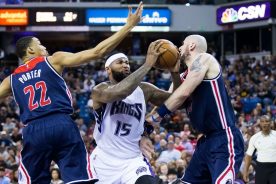 NBA Championship offers yet another matchday. Sacramento Kings will play away against Washington Wizards. Both teams fly under the radar and are not included to the list of eight strongest teams of their Conferences. But we cannot say that the upcoming game is not going be interesting.

In the last five games Washington got three wins and failed twice. They defeated New York Knicks, Phoenix Suns and Orlando Magic, while lost to San Antonio and Miami Heat. After fifteen games Washington gained 5 wins with 10 losses. The percentage of victories is 0,333, which corresponds to the 12th place in the Eastern Conference standings. Washington played 9 home games and had four victories against five defeats.

Recently Sacramento has been showing a good form. In the last five games the Kings defeated Brooklyn Oklahoma and Toronto Raptors, but lost to Houston and Los Angeles. Sacramento is on the 11th position in the Western Conference table with a winning percentage of 0,444.

These opponents have an interesting head-to-head statistics, according to which the host team won recently. Bookmakers consider that the upcoming game will be played in the same style and Washington is going to get the victory. It is very likely that it would really happen, because the Wizards showed a good form in the last game. Pinnacle bookie gives odds at 1.54 on Washington’s victory.