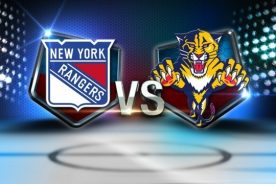 In the next round of the Eastern conference New York Rangers will host Florida Panthers. These rivals had different starts of the season. Despite the poor results in the preseason, Ranger are showing perfect form in official matches and are among the leaders of the season, while Florida is just dreaming to get into the top eight in the East.

The last four matches the Rangers played away, and won each of them. First, they beat Calgary with the score 4:1, then Edmonton 3:1 and Vancouver 7:2. Rangers managed to earn 26 points after 18 matches played. New York is two points ahead of Montreal that is leading in the East.

Despite the fact that Florida is currently on the 12th place in the East standings, Panthers is a serious rival for any team. In five last matches Florida managed to get three wins with two defeats. They defeated Montreal, Islanders and Tampa Bay. Their team leader is Jonathan Marchessault with 9 goals and 6 assists.

Rangers had 10 home games. They won eight and lost only two. Florida won only 2 away games, while six lost. We believe that New York is going to win. Marathonbet sets odds at 1.64 on Rangers win.