188Bet has extended a sponsorship agreement with Wigan Warriors 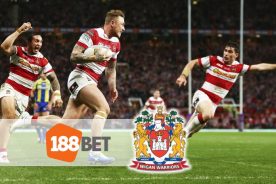 The press relations service of 188Bet British bookmaker has declared the prolongation of the sponsorship agreement with Wigan Warriors Rugby Club until the end of 2016-2017 season.

Thus, the British bookmaker will be the main official sponsor of the Warriors. The logo of 188Bet bookmaker is printed on the front of rugby club skirts, and will also receive wide publicity inside the home arena Wigan Warriors DW Stadium.

It should be noted that 188Bet bookmaker is one of the partners of Warriors from Wigan since 2010, and it will be the naming sponsor for the second consecutive season.

Wigan Warriors is one of the oldest and most renowned rugby clubs in England. Founded 144 years ago, the club won the championship 20 times, which is an absolute record of the national competition. All in all Wigan Warriors won 105 trophies at various tournaments.

188Bet is one of the most promising English sportsbooks. It runs active sponsorship and advertizing campaigns. 188Bet partners with West Ham United Football Club, Poker Championships, and Champion of Champions snooker tournament and many others.