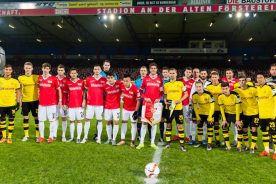 The second round of DFB Pokal brought some surprises. Two representatives of Bundesliga failed to go through to the next round. They are Darmstadt 98 and Mainz 05, which were beaten by Astori Walldorf (1:0) and Greuther Fürth (2:1) consequently.

Some troubles faced Borussia Dortmund. Tomas Tuchel`s team had been winning against Union Berlin until they conceded a goal in a last 10 minutes of the game. Full time of the game at Signal-Iduna-Park finished with 1:1 score (44` Parensen OG – 81` Skrzybski). That was the only shot on target of away team during the game. In penalty shootout Borussia scored 3 goals (Dembele, Ginter, Gotze) while Weidenfeller managed to make 3 saves in a row.

A game between Koln and Hoffenheim was very tough too. Away team scored first and Koln managed to level in the 36th minute. The decider was scored in extra time by Modeste. So, Köln goes through.