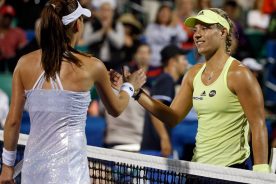 The two best world tennis players are going to meet at Women`s WTA Championships Semifinal in Singapore. Angelique Kerber got three wins in group, but all her rivals were single-style. Both Halep and Cibulkova play quick attacking tennis, but their defense has some drawbacks. Kerber has good defensive skills. Keys and Cibulkova were beaten quite easily, but Kerber faced certain problems with Slovakian. She won in a three-set game (7-6, 2-6, 6-3).

Radwanska differs a lot from previous Kerber`s contenders. She ranks 3 and also won the last game against Kerber. It was qualifying round of WTA Tour in Beijing in 2015. She won confidently 6-1, 6-4 being also underdog.

Unlike Kerber, Radwanska previously had two tough games against Gabrine Muguruza (7-6, 6-3) and Svetlana Kuznetsova (7-5, 1-6, 7-5). Naturally she used more energy and much turns on her stamina. Radwanska`s playing style looks like Kerber`s. She plays well in defense and has sharp counterattacks. Radwanska won WTA Championships title last year and can double it this year.