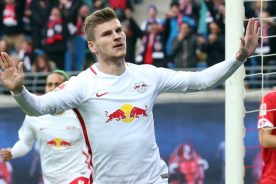 The trip to Leverkusen was another serious test for Leipzig, and the Bull coped with it nobly.  The beginning of the match was shocking for the guests. Flashy Bayer`s attack ended in Kampl`s goal. 3 minutes later Red Bull came back due to Baumgartlinger`s own goal. In the last minutes of the first time home team scored second goal. Brand scored a goal with Calhanoglu`s assist.

In the second time Bayer lost the lead. First, Leno slipped up, failing to cope with Forsberg`s long shot – 2:2. Then Forsberg produced cross from the right wing into penalty area, where Orban headed the ball into the net – 2:3. Bulls continue their winning race.

As a result Leipzig produced come-from-behind victory and got very important 3 points, which allowed the Bundesliga`s newcomer occupying the top spot in the league table. Only the match between Borussia Dortmund and Bayern Munich can change the things. Bayern can get equal with Leipzig in case of next match win.