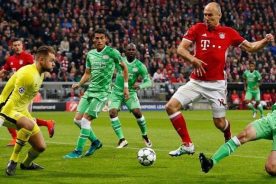 These teams met already two weeks ago. It was played in Munich and home team won due to goals of Muller, Kimmich, Lewandowski and Robben with the total core 4:1. Bayern is currently second in the group standing with 6 points. PSV has the only point due to draw with Rostov in away game. They are now fighting for Europa League spot.

In previous 7 matches against Bayern, PSV won only once and lost 5 times. They scored only 5 goals and conceded 12. They are looking forward to secure one point on Tuesday evening but Bayern will try to keep pace after Atletico Madrid.

Bayern won 4 previous games with total score 12:3. PSV had victories over Vitesse in the last Eredivisie game 0:2 and over Sparta 1:0. Cocu`s team has certain problems with scoring goals this season. Defensive line is not their strong point too.

All the bookmaker consider Bayern to be much fancied team in a return game. We also believe that they will get 3 points but the game is going to be tough. Bayern individual total is going to be under 2.5. William Hill odds are 1.61 on this outcome.