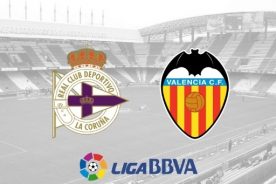 10th Round of Spanish La Liga will be closed by game at Riazor. Last season both matches between the rivals ended in a draw 1:1.

Deportivo has not the best season in history. Over the last five Rounds the team managed to win only one game over Sporting Gijon 2:1. Another four games were lost to Leganes 1:2, Atletico Madrid 0:1, FC Barcelona 0:4 and Celta 1:4. Eight conceded goals in last two matches clearly indicate that they certainly have problems with defensive line.

Valencia had an awful start of the season. Four defeats in a row at the start of La Liga put an end to the Paco Estrana`s career at the club. As the result Cesare Prandelli was appointed as the new manager of Valencia in early October. The Bats played two matches with the new coach. In first Valencia was able to get win over Sporting Gijon, and then they lost in tough home game against Barcelona 2:3, conceding the decider from the penalty spot in 90+4. It should be noted that Valencia is the most uncompromising team.

The Bats are playing attacking football, although Deportivo is able to score in a home game too. We expect for more than 2 goals in the upcoming match. BetOnline over/under 2.5 odds are set at 2.06.